A View From The Pew!

All of the Scripture passages noted in the Revised Common Lectionary for this week, November 27th, are about the Advent of the Christ, Jesus. (And not surprisingly as this Sunday is the first day of the Advent season.) However, and I am excited to say, all the passages are focused on Christ’s SECOND advent - his return to earth that has been promised to occur at the end of this current 2000-year Age.

I truly am amazed that at this time the Revised Common Lectionary focuses on Christ’s 2nd coming as most of the world right now is busy focusing on his first appearing - his birth and all the commercial pursuits the world engages in at this particular time of the year. (And pushing Jesus back into the shadows further and further as the years roll on.) Be assured, I am fully on board with the current focus of the RCL.

Yes, to be true, it is utterly important that we remember, acknowledge and declare the first appearing of our Lord. It is wholly as Paul said, “the night is far gone, the day is near. Let us then lay aside the works of darkness and put on the armor of light…”  But Christ’s first appearing has no purpose without his second. Christ’s first appearing was to make us fit, able and sanctified to participate in, and be agents in his Father’s kingdom - a kingdom that is headed our way in quick time!  The focus of Christ’s Church Universal, at this time, needs to be much more directed on the future Advent rather than of the past Advent. This is not to say we, as last-days-disciples of Christ, should neglect in any way the power and importance of Christ’s first appearing. But, in light of the nearness of his soon return, we must be diligent “watchmen on the wall” to alert those living today of his imminent arrival and establishment on earth of his Father’s kingdom (government.)

I would like to add, that in spite of what many nay-sayers claim, that “no one knows the day or the hour” of our Lord’s return, that they are quite possibly biblically and historically unaware of certain Jewish understandings. It is, of course, true that Jesus himself said in Matthew 24:42, “Keep awake therefore, for you do not know on what day your Lord is coming.” I understand that many claim the statement was declaring there was/is no way anyone could know when Christ might return; but many suspect Jesus was actually revealing just what “Day” he would return! And, it is for the following reason some believe this.

It’s a biblical fact that Jesus fulfilled four of God's prophetic, holy feast days during his first appearing. Those are: Passover; The Feast of Unleavened Bread; The Feast of Firstfruits and Pentecost. And logically, it is also believed that Jesus will fulfill the last three prophetic, holy feast days at his 2nd appearing. Now, the first of those last three feast days, all of which take place in the Fall, is the Feast of Trumpets. And get this; because that day began only after two witnesses observed and reported to the Jewish religious leaders, the Sanhedrin, sighting the first sliver of the New Moon for the month of that feast day, no one knew exactly when that feast day arrived until AFTER it actually arrived! In fact, because no one actually knew when the New Moon of the Feast of Trumpets would actually and precisely be unidentified (arrive) the Feast was also known as of the Feast of the Unknown Day and Unknown Hour. Thus, it is reasonably speculated that Jesus by saying what he did in Matthew 24:42, that he was slyly making it known what “Day” he would appear - the first day of The Feast of Trumpets - the Feast of the Unknown Day and Unknown Hour!

The year of our Lord’s long expected arrival is also a matter of much debate and speculation; and it is also believed to be obliquely and surreptitiously revealed in the many pages of the Scriptures, both Old and New. Both the mysterious Day and the mysterious Hour make for interesting, exciting and sometimes heated discussion. But the real point in this commentary is that each advancing “Advent Season” should cause one to look forward in time far more than to look back. Jesus did his great work of salvation nearly two thousand years ago. As he said, “It is finished.” And true, many yet are in need of learning what that means for them. Nevertheless, we are far closer, very close in fact, to when Jesus will undertake another, although, different great a work, the very work he constantly declared during his first appearing - the literal, physical establishment of God’s kingdom on earth and the restoration of all things!

Yes, Advent is upon us; and it is a good and necessary thing to look back on that day in Bethlehem over two thousand years ago and give praise and gratitude for it. But a great day is before us as well.  A day that we, as last-day-disciples, can well be a living part of. Watch, therefore, as Jesus commanded us, his disciples, to continually do. Watch for the signs of his appearing. Many signs have already appeared. But, only those with “eyes to see” and by those who are in fact looking, can such be identified.

So again, I say watch. For it is true, one cannot see unless one watches.

​​See here for the current worship bulletin for this past Sunday

The NSUMC has recently instituted an Online Giving Portal where anyone may electronically make a gift or offering to the NSUMC via Credit Card or directly from a bank through a Checking Account or Savings Account. To make an electronic donation, for any purpose -- Benevolence Ministry, Building Fund, Pledge offering or whatever, please click the secure link below and follow the prompts to make a one-time or reoccurring donation.

Thank you ever so much for your support!

The NSUMC had a successful day at the Salem Scramble event on September 24, 2022. To check out some photos of the event, please click here to see the goings on with the NSUMC participants and their supporters! 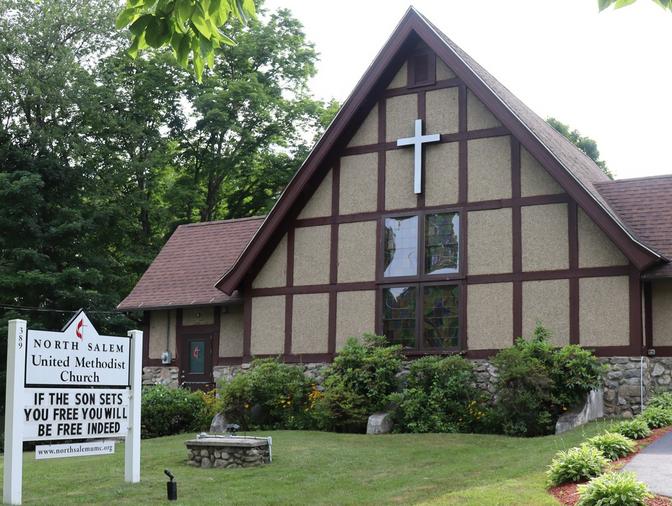